3 years ago in Note Software ~ read.

Why we need transaction?

However, implementing a fault-tolerance machine costs too high so the need of transaction rise. Basic concept: All read and write are operation, if it success then commit, otherwise, abort/rollback.

more simpler because partial no partial fall and simplify the programming model for application accessing database. Application is free to ignore certain potential error because DB deal with it.

Something cannot be broken down into smaller parts.

There are many different mean in other branch. For example, in multiple-threaded programming, it means no other thread can see half-finished thread's result. However, in ACID, atomicity is no mean for concurrency which is covered in isolation (AC"I"D).

Atomicity here, means when it fail, system can easily recover to previous state, perhaps abortability would have been better term.

This word is terrible overloaded. In hasing, CAP, asynchronously replicant. The idea is certain statements about your data(invariant) should always be true.

It depend on application rather than on database and should be application's responsibility to define it. Database don't support this feature, or not support it well. For example, developer can manually modify data in database.

If multiple read and write same part of database. There might be an race condition.

For example, both opA and opB want to read COUNT and add one. Currently , COUNT is 2, so the result could be 3 and 4.

Concurrent execution should be isolated to each other, or you can say serializability. But in reality , it is rarely used because of its performance penalty. Some database don't even implement it, but use weak isolation.

The purpose of database is to provide a safe place where data can be stored without fear of losing it.

Durability guarantee, a database must wait until these write/replications are complete before reporting success.

However, perfect durability does NOT exist.

Transaction have multiple operations. For example,

There two problems in above graph.

Many non-relational database don't have such a way of grouping operations together. Even if there is a multi-object API, that doesn't mean it has transaction semantics: the command may succeed for some key and fails for others, leaving the database in a partially updated state.

Some more complex atomic operations like increment operation which remove the need of read-modify-write cycle, compare-and-set operation(only allows a write operation when the value has not been concurrently changed by someone else). However, they are very useful but not in the usual sense of the world as transaction.

The need of multi-object transactions

Many distributed database have abandoned multi-object transaction because it is hard to implement. Also high availability or performance is required.

There are some use cases in which single-object operation are sufficient. However, many other cases writes to several different object need to be coordinated.

Not all DB follow real ACID and abort all if fail.

DB with leaderless replication work much more on a "best effort", which will not abort all if fail.

Retry is good, but many framework don't implement it and some situation is not good for retry.

In theory, isolation should make your life easier by letting you pretend that no concurrency is happening.

Serializable isolation has a performance cost and many database don't want to pay the price. It therefore common for system to use weaker level isolation.

However, bug caused by weak isolation is not just a theoretical problem.

A popular comment is "if you want to deal with financial, use ACID." But nowadays, even popular RDBMS use weak isolation.

Read/write object when another transaction is not yet commit.

Having no dirty read/write cannot prevent race condition of some case. For example, you have series of transaction to update counter and if counter is 5 then add up 1.

Read committed is a very popular isolation level. It is the default setting in the Oracle 11g. Most commonly, DB prevent dirty write by row level lock. How about dirty read? same method will have performance issue due to one write lock will block multiple read-only operation.

Now DB can remember two values. Old value and new value. give old value when locked and give new when no lock on data.

How to make snapshot?

It is a popular feature supported by many database, postgreSQL, MySQL, Oracle and others.

Transaction may need to see different points of time, so it must keep several versions of snapshot(MVCC, multi-version concurrency control).

A typical approach is that read committed isolation(only remember old and new value) use separate snapshot for each query while snapshot isolation(usually MVCC) use the same snapshot for an entire transaction. 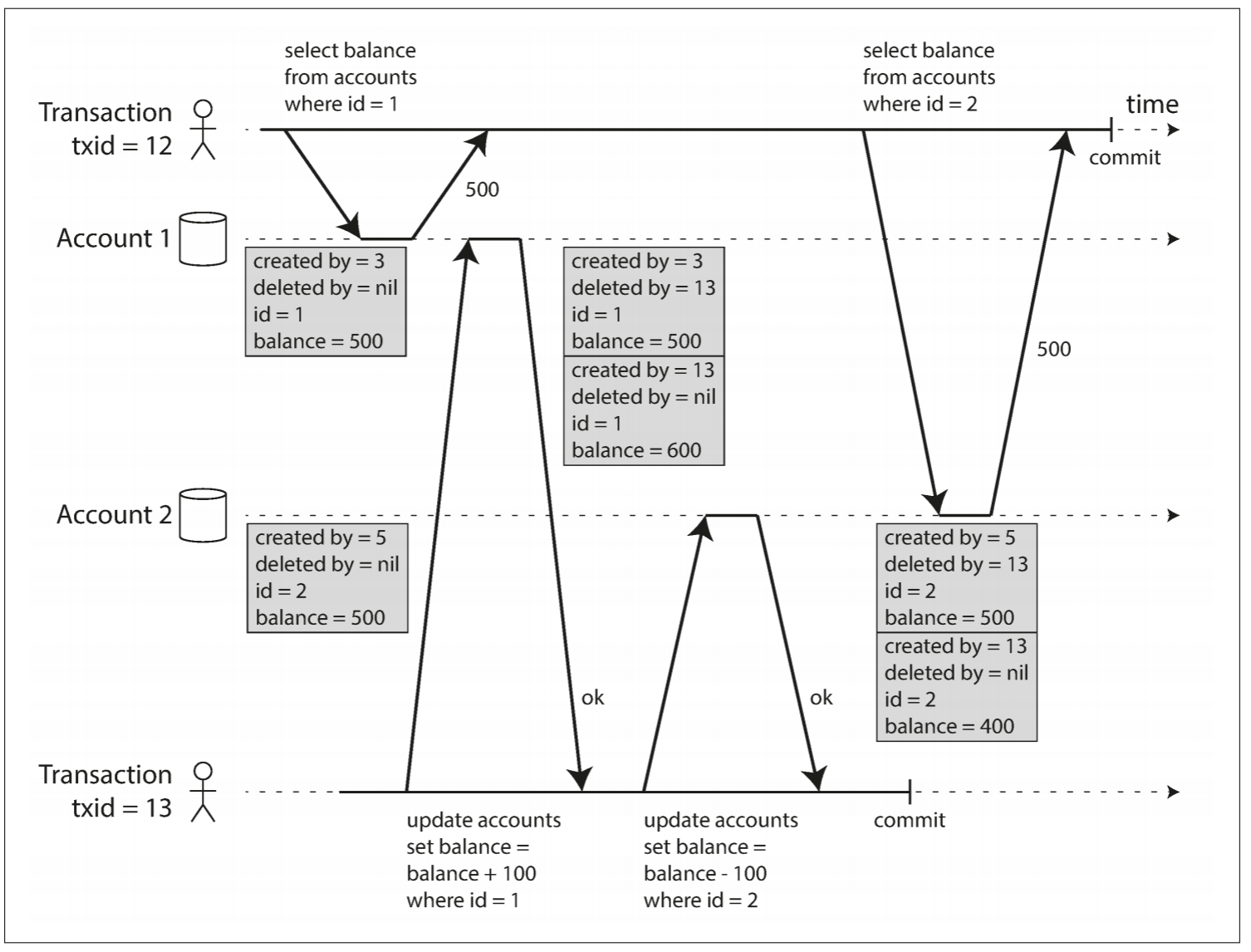 From above graph, transaction 12 cannot see object created by transaction 13 so it still see 500 in account. Also, DB not really delete or change any data but keep all of these changes in stack. A deletion will ark for deletion and let garbage collection to delete it. An update is internally translate to delete and create.

By never updating values in place but instead creating a new version every time a value is changed. the Database can provide a consistent snapshot while incurring only a small overhead.

Need some way to handle performance issue for multi-version DB. For example, PostgreSQL has avoid index update if different version of same object can fit in same page. Another approach is used in couchDB, it use append-only approach which always make a copy up to root of tree. All transaction create a new root, but require background for grabage collection.

Other name of snapshot isolation

People use different name for snapshot isolation because it is not in SQL standard.

In above, we talked about how to guarantee a read-only transaction can see in the concurrent write. How about writing concurrently?

Many DB provide atomic update operation which remove the need of read-modify-write cycle. It usually the best solution if your code can expressed in terms of those operations. (write all operation in one SQL) But not all writes can easily do this. For example, update wiki page involve arbitrary text editing.

Usually implemented as an exclusive lock on the object until update is applied. This technique is sometimes known as cursor stability. Another option is to simply force all atomic operations to be executed on a single thread.

Let application to explicitly lock objects that are going to be update. for Example, multi-player game that every one can control same figure.

Allow execution in parallel, and if detect lost update, abort the transaction and force it retry read-modify-write cycle.
pros: efficiently in conjunction with snapshot isolation but not all DB has it. ex, mySQL don't has it.

If value is not the same as last read, retry operation. However, if query read from old snapshot, it my not detect change.

Lock and "Compare and set" doesn't work here because they assume there is always one updated replication. However, in multi-leader database, it is not the case. Instead, we have two options.

For example, it require at least one doctor is on-call. Currently Doctor A/B is both on-call.

This effect where a write in one transaction changes the result of a search query in another transaction is called phantom. Snapshot isolation avoid phantom in read-only query but not read-write transaction.

One way to deal phantom(especially when row is not yet exist) is to materialize it. For example, booking meeting room. booking not yet exist, but we can create all combination of time slots and then lock it. (so the SQL above will return a row the lock it)

However, it is error-prone and ugly. It also let a concurrency control mechanism leak into the application data model. So this method should be the last option.

We have some hard situation here.

One simple solution is Serializability . Usually considered as strongest isolation level. It guarantee that if the transcations behave correctly when running individually, they continue to be correct when run concurrently. So DB prevent ALL possible race condition.

The simplest way of avoiding concurrency problem is to remove them entirely.

Even though it seems obvious but it become feasible after 2007. Because

However, its throughput is limited to that of a single CPU core.

For example, booking a hotel, Can we make whole process into one procedure? Not a good idea. Human is too slow than DB will need to support huge number of concurrent transaction. On the web, it use interactive mode.

For this reason, single threaded serial transaction processing don't allow interactive multi-statement transactions. Because it spend too much time on network. Instead, application must submit entire transaction code to DB as stored procedure. 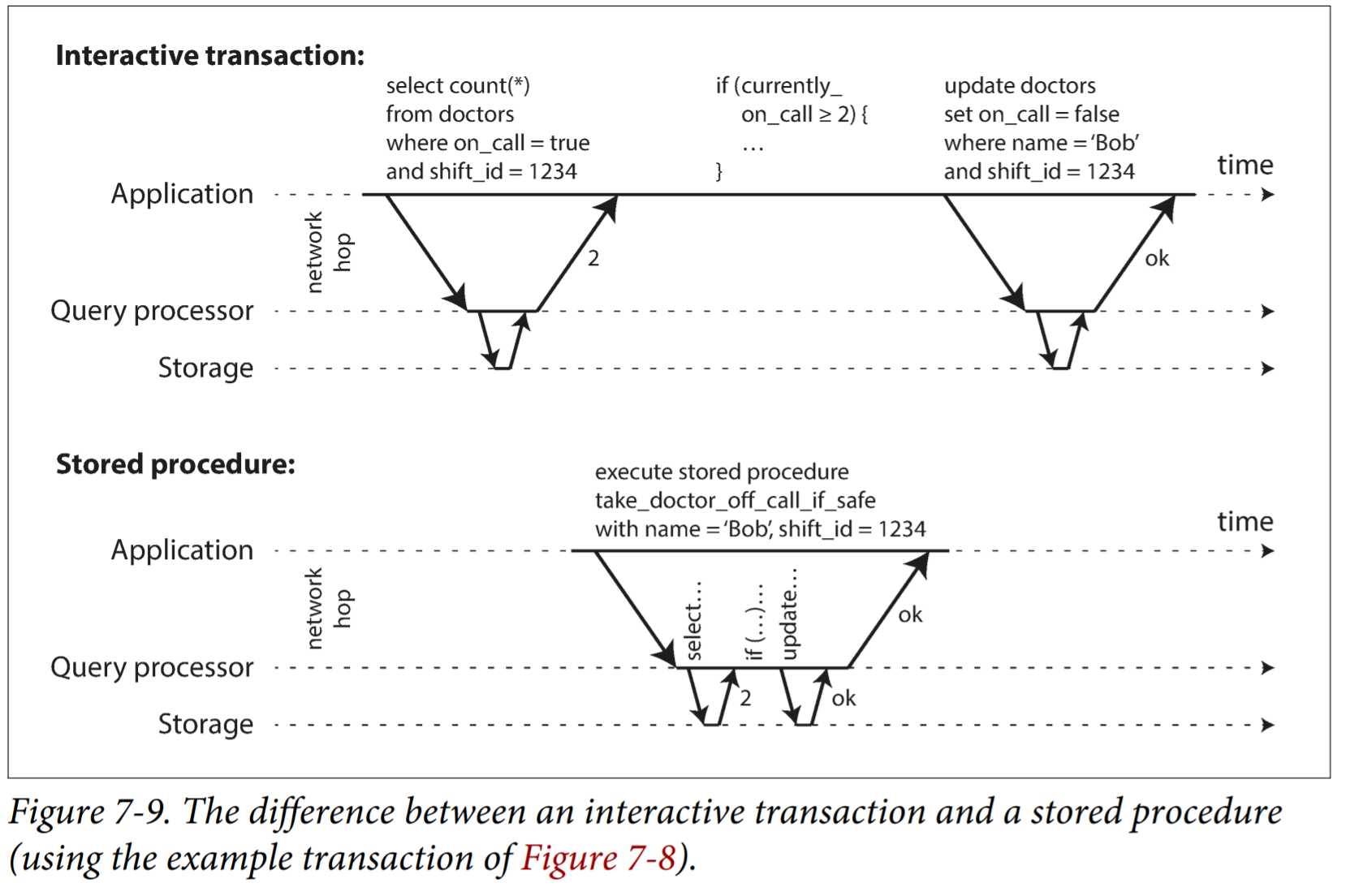 Pros and cons of stored procedure

Procedure need to be deterministic(same result in different node).

Read-only transaction may execute else where, using snapshot isolation. But for applications with high write throughput, the single-threaded transaction processor can become a serious bottleneck.

If you can find a way to partition your dataset so that each read/write only happen in one partition then we can run concurrently.

However, for any transaction that needs to access multiple partition. The database must coordinating the all partitions it touch. That will have additional overhead, they are vastly slower than single-partition transaction.

Because of this, 2PL provide Serializability. It protects against all the race conditions, include lost update and write skew.

Lock with conditions. For example, book meeting room. It is ok to book same room in non-overlaping time slot. Predicate lock applies even to objects that do not yet exist in the database.

Predicate lock do not perform well. That's why most 2PL actually implement index-range locking(next key locking). It is safe to simplify a predicate by making it match greater set of objects. For example, Booking a room from 12-1pm. You can attach a lock on time index around that.

If there is no suitable index. It fall back to shared lock on the entire table.

Are Serializable isolation and good performance fundementally at odd with each other?
SSI is full serializable with little performance penalty. First described in 2008[1] now used in postgreSQL greater V9.1. FundationDB has use it across in different machine.

Serializable snapshot isolation is an optimistic concurrency control. Instead of blocking off, execute anyway and abort transaction if conflicts. It performs badly if there are high contention(many transaction try to access same object. Retries make performance worse.)

On top of snapshot isolation, SSI add an algorithm for detecting serialization conflict among writes and determine which transaction to abort.

Decisions based on outdated premise

Outdated premise: The fact that was true at the beginning. 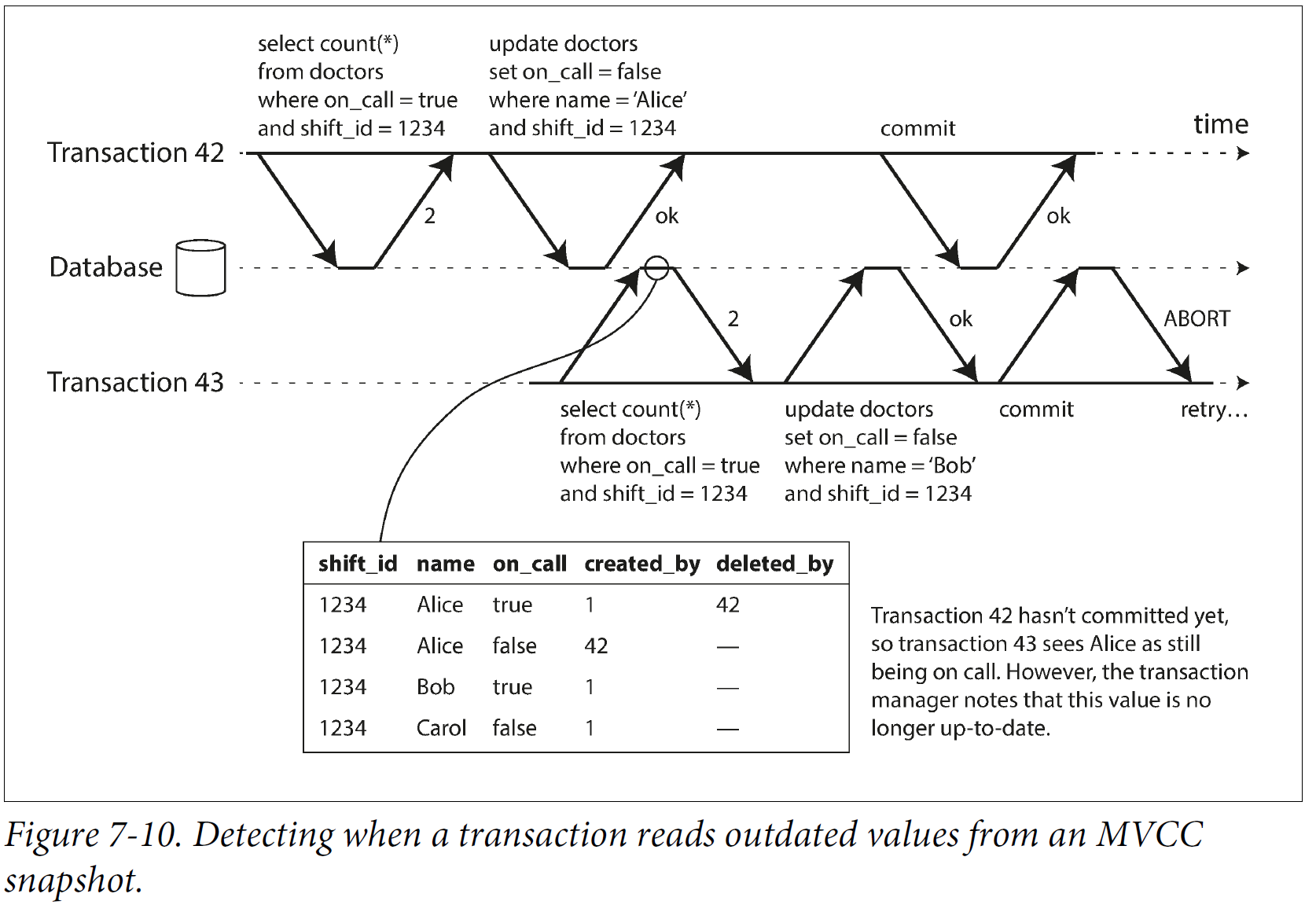 Transaction 42 is ignored until it is committed. After write, DB noted that value is no longer updated. After commit, transaction 43 is aborted. 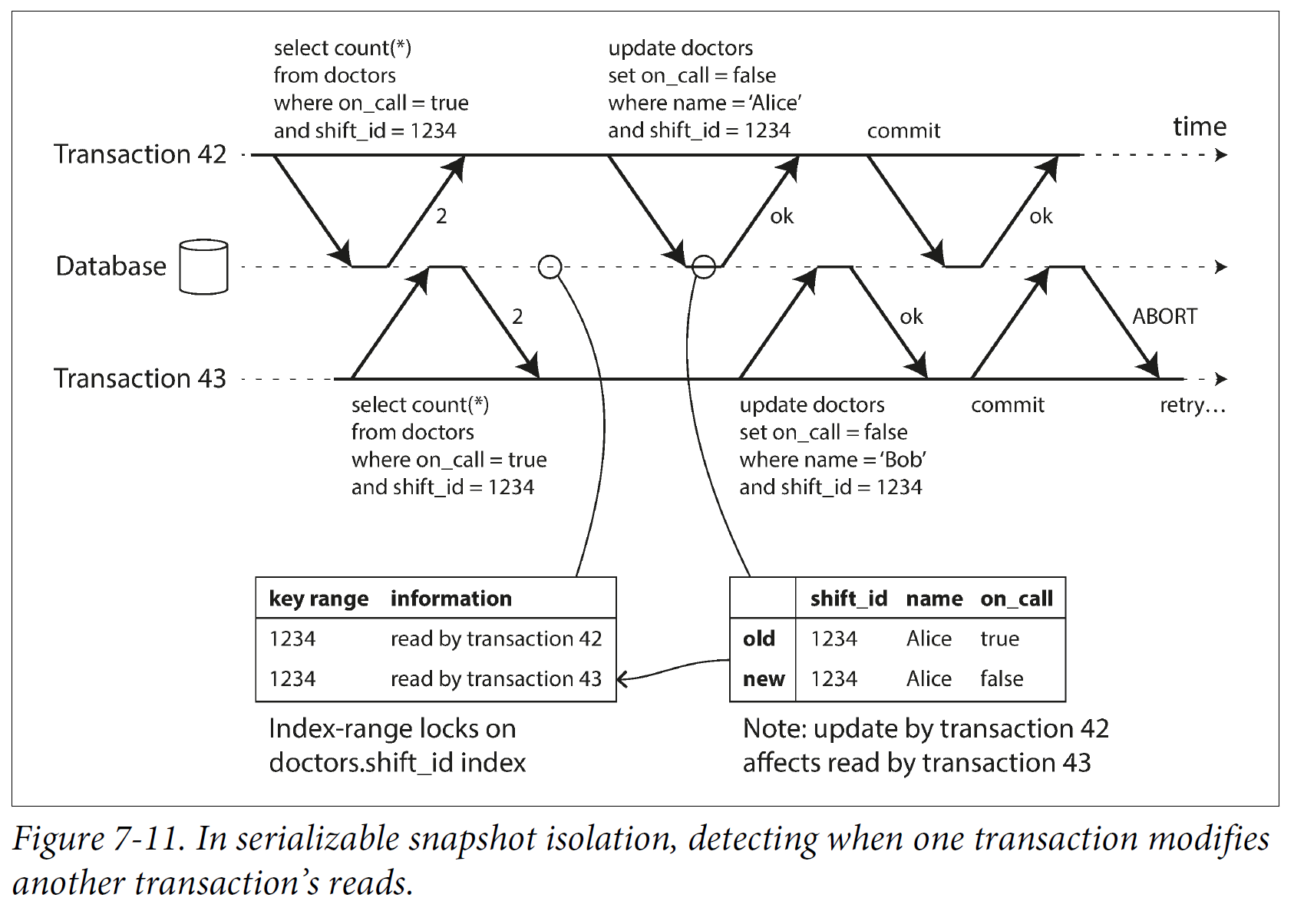 When transaction 42/43 look up for shift id 1234, DB find the index of 1234 if it exist and record 42/43 has read it. When transaction 42 udpate value, DB notify other transaction in its record that has read the value that value is no longer up to date. Transaction 43 will be aborted after 42 is committed.

There's always a lot of trade off.

Compare to 2PL. The big advantage of serializable snapshot isolation is that one transaction doesn't need to be blocked and waiting for locks hold b other transaction. Read-only query can run on consistent snapshot without requiring any lock, which is very appealing for read-heavy workload.

Compare to seriazlized execution. Serialized snapshot isolation is not limit to the throughput of a single CPU core.

The rate of abort significantly affects the overall performance os SSI. So SSI requires that read-write transactions be fairly short. However, SSI is probably less sensible to slow transaction than 2PL locking or serial execution.

A software engineer who likes to challenge problem and new technology.