Comprehensive MEAN(Mongo, Express, Angular, and Nodejs) with Docker I

Sometimes, I would like to learn something comprehensively. Not only how to do this, but also how people usually do it and what tool do people use. So here comes this post. This contains both MEAN stack and tools people usually use.

I will introduce them in four parts.

There are several reason why I choose docker as my development environment.

Refer to docker's doc - install to see how to install.

After install you should able to run docker commend.
Now you need a docker-machine to run your app.
Refer to docker's doc - start docker-machine.

Dockerfile is what you want to setup your docker container. Below is my Dockerfile for this MEAN project.

Having this Dockerfile, you can easily share your environment with your team members or build your image and run it anywhere with docker.

Also, you can organize your project with docker-compose file. By doing so, you can run multiple container in one commend and save a lot of time with docker run commend.

Let's talk about this docker-compose file. Now we have two services. One is memo which is our todolist app, another is mongo which is our MongoDB. Also, memo open port 8080 mapping. Your docker machine will looks like below. 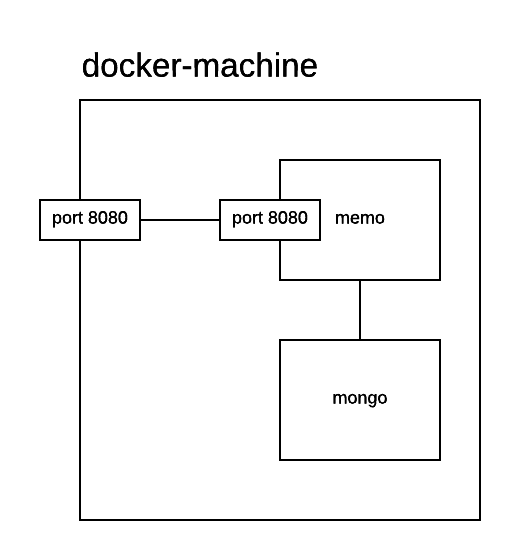 There are two mechanism in docker to link two container.

This method will put the liked service ip address into environment variable. You can see their doc here. For example, if your are using node application, you can retrieve ip address by process.env.DB_PORT_5432_TCP_ADDR

This will indicate memo is depend on mongo service. So container memo will not start until container mongo finished.

Noted: While I said container mongo finished, it only means container finished start process, not include service initialized. So you might find a problem that your app is ready but your database is not finished initialized even if your app depend on your database. You could retry connection after connection failed.

You can find this code in my github repo MEAN pracitce.

Next: Nodejs and Express

A software engineer who likes to challenge problem and new technology.